This is an invitation for you to get involved in the big gas fight brewing in the west. Join us in Perth for a Film and Info Night to learn more, meet others and get active.

Sitting beneath some of the most precious, fertile and culturally significant places in WA is a vast swathe of unconventional gas. Companies like Buru Energy, Origin Energy and AWE are gearing up to use risky fracking techniques to drill beneath the iconic Kimberley and the fertile soils of the Mid West.

So join us on Thursday 24 July for a film screening and discussion of what each of us can do to stand up to gas expansion in WA.

Who’s invited: This event is open to the whole community – from experienced campaigners to folks that are learning about fracking for the first time.

RSVP: fill in your name in on the right

We hope you can join us and help to build the movement to move WA beyond fossil fuels! 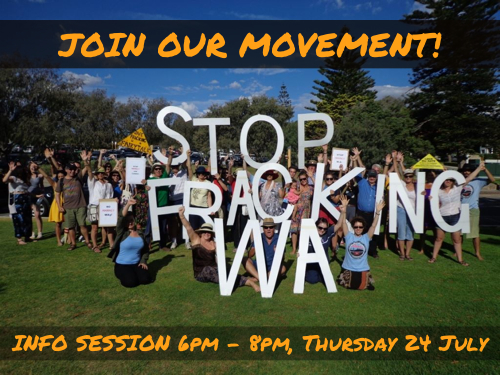