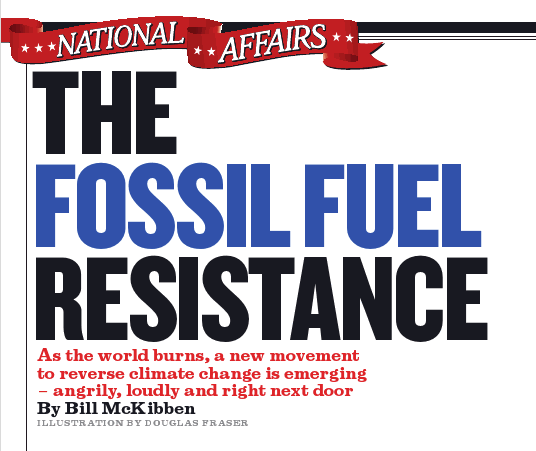 It got so hot in Australia in January that the weather service had to add two new colors to its charts. A few weeks later, at the other end of the planet, new data from the Cryosat satellites showed 80% of Arctic sea ice has disappeared. We’re not breaking records any more; we’re breaking the planet. In fifty years no one will care about the fiscal cliff or the new Pope; they’ll just ask: “So the Arctic melted, and then what did you do?”

And here’s the good news. We’ll be able to say at least we fought.

After decades of scant organized response to climate change, a truly powerful movement is quickly emerging, around the country and around the world. It has no great charismatic leader, and no central organization; it battles on a thousand fronts, many of them very local and small. But taken together, it’s now big enough to matter, and it’s growing fast.

So you could call it by many names. But for me it’s the Fossil Fuel Resistance.