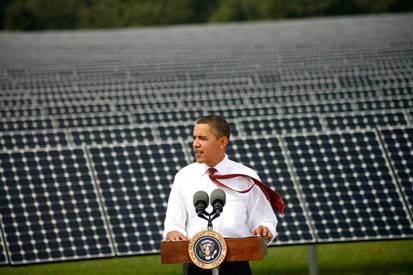 In October of 2010, after a campaign led by 350.org, the Obama Administration committed to installing a new set of solar panels on the White House roof. The panels haven't gone up yet, so we're ramping up the pressure to make sure the most famous house in the country goes solar!

Add your voice by signing the petition -->

On October 5, 2010, Secretary of Energy Steven Chu announced that the Obama Administration would be returning solar panels to the White House roof. (President Carter installed solar panels on the roof in 1979 only to have them removed by President Reagan a few years later.)

“As we move toward a clean energy economy, the White House will lead by example,” said Sec. Chu. “I’m pleased to announce that, by the end of this spring, there will be solar panels and a solar hot water heater on the roof of the White House.”

Our team here at 350.org has a vested interest in seeing solar panels back on the roof. In the summer of 2010, summer, we launched a campaign, “Put Solar On It,” challenging world leaders to install solar at their presidential residences. Some elected officials seized the opportunity. President Pratibha Devisingh Patil announced a new 50kw array for India’s presidential palace. In October, President Mohamed Nasheed of the Maldives took the challenge a step further, actually getting up his roof to help install the solar panels himself.

The Obama Administration proved a bit more difficult to convince. After a number of unproductive phone calls with the White House Council on Environmental Quality, our team at 350.org decided to help push the process along a bit.

As it turned out, one of the original Jimmy Carter solar panels, after being exiled from the White House by Reagan, had ended up on the roof of the cafeteria at Unity College, a small environmental college in Maine. So, on September 7, 2010 350.org founder Bill McKibben and a group of Unity students took one of the panels, put in the back of a bio-diesel van, and began to drive it back to its rightful home at 1600 Pennsylvania Avenue.

After great rallies along the way in Boston and New York, our team and the Carter solar panel arrived at the White House. A meeting with administration officials ended in disappointment, however. The officials would neither accept the original Carter panel nor commit to installing a new set of panels on the roof. The promised only to “continue their deliberative process.”

How the installation would play in the press must have been part of the deliberations. Less than a month after our visit, and after taking a bit of a “shellacking” in places like Time, the Washington Post, the AP for their refusal to commit to our request, the administration announced that deliberations were over and a set of panels would be up by spring 2011.

And now, here we are. As Bill McKibben said recently:

Well, they promised they'd have these panels up, and I'm sure they will. They're a can-do bunch, and I'm sure they've been hard at work on this since making their promise in 2010; only a cynic would suggest they committed to the installation just to get us off their backs. Maybe the president will even strap on a tool belt himself, like the president of the Maldives, Mohamed Nasheed, who installed panels on his residence in a matter of weeks in 2010.

In the meantime, we’ll be collecting another round of signatures to send over to White House showing that the American people want President Obama to fulfill his promise. Installing solar panels on the White House isn’t a replacement for a sound climate policy, but it’s concrete step in the right direction.

As Bill McKibben said at the time of Secretary Chu’s announcement, “The White House did the right thing, and for the right reasons: they listened to the Americans who asked for solar on their roof, and they listened to the scientists and engineers who told them this is the path to the future. If it has anything like the effect of the White House garden, it could be a trigger for a wave of solar installations across the country and around the world.”