An explosion and fire in a coal mine operated by the Soma Group in Soma, Turkey killed 301 miners.

All of us living in Turkey are shaken and sad. But we are also extremely angry. We are angry because we know that those deaths could have been avoided. 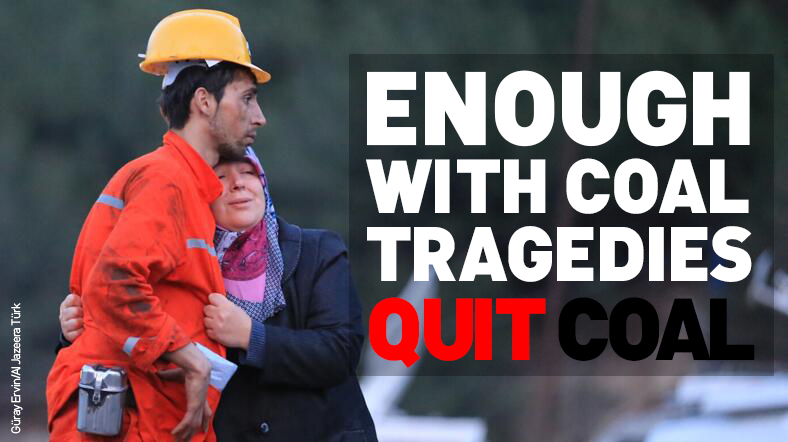 Around 50 thousand miners are estimated to work in those black coal pits in Turkey. Tens of miners die every year and hundreds more are injured (these are official numbers, real numbers are said to be higher). And Turkey plans to increase coal exploitation even more. The government of Turkey declared 2012 as the “year of the coal” and the official policy is to exploit every coal, gas and oil reserve within the country by 2023. The mining industry is heavily subsidized. 51 thousand new mining licenses were granted in April only.

All of these would mean more worker deaths, more injuries, more emissions and increasing temperatures. Four years ago, Prime Minister Erdoğan called the deaths resulting from another coal mining accident as “fate” and this time the Prime Minister called these accidents “normal”.

Yet, this is neither normal nor needs to be anybody’s fate. We can stop this. Turkey is a rich country in terms of climate friendly energy sources not to mention the savings that could be achieved through simple energy efficiency measures. Turkey does not need fossil fuels or other dirty sources to supply its energy. An energy infrastructure built on energy efficiency, smart grids, sources of climate friendly and sustainable power would satisfy the energy demand and provide enough decent jobs to employ every coal miner and more.

Not one more life needs to be sacrificed in those black pits -- leave the coal in the hole.

Join our call to the government of Turkey to stop exploiting and subsidizing fossil fuels and dirty energy, improve energy efficiency, and start investing in a fair transition to climate friendly energy.