For more than four years, we've been pressuring the Big Four Banks of Australia -- NAB, Commonwealth, ANZ and Westpac -- to ban investment in new coal, oil and gas and lead on climate change. Today NAB put forward a new sustainability policy.  While the bank is stepping up its investments in the low carbon sector, it still leaves the door open to more investment in fossil fuels.

Sign our petition demanding the NAB, Commonwealth, Westpac and ANZ banks actually deliver on their commitments to keep global warming below 2 degrees C by ruling out investments in new coal and to set timeframe for phase out investment in new oil and gas over time.

We know the Big Four Banks can react quickly. It took less than 24 hours for all of the banks to cut ATM fees after one led the charge.

For four years we've been writing, protesting, divesting and demanding the banks rule out Adani and lead on climate change. We ask you to join us for one big push!

Sign our petition, and ask your friends and networks to join you. We will deliver the petition to the NAB, CBA, Westpac and ANZ banks before the end of the year so that your voice demanding climate leadership is heard.

To the boards and executive teams at the NAB, Commbank, ANZ and Westpac,

We demand that you deliver on your commitments to keep global warming below two degrees and rule out funding for all new coal projects in Australia and around the world.

We urge you to step up and show leadership: rule out investment in new coal and show us your plan for phasing out oil and gas. This is the only way you can deliver on your climate commitments to ensure a safe climate future.

Thanks for signing! We will deliver this petition to the boards and executive teams of the NAB, Commonwealth Bank of Australia, Westpac and the ANZ banks to ensure they hear our demand that they deliver on their climate commitments with a policy to ban all new investment in coal. 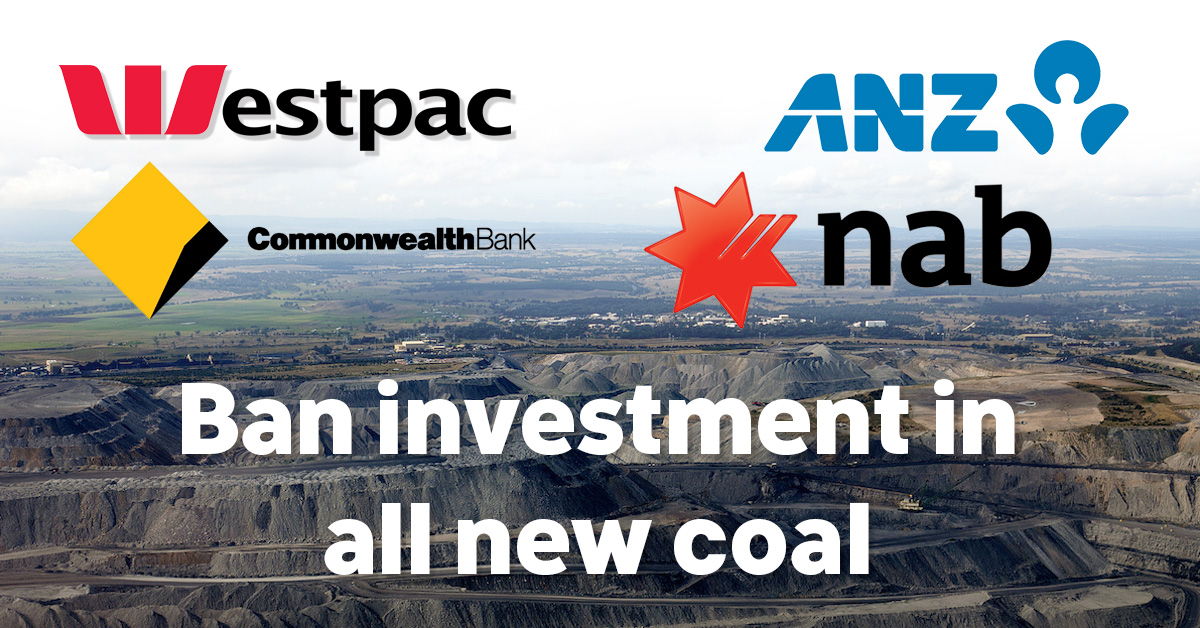 Tell NAB, Westpac, CommBank and ANZ to live up to their climate commitments and FINALLY ban investment in all new coal projects!