The science is abundantly clear that we need to keep fossil fuels in the ground to ensure a future for our planet, and that means we can’t let any new coal plants be built anywhere in the world. So the Vung Ang 2 coal-fired power station in Central Vietnam - currently planned for financing by Japan’s biggest banks - is a definite no-go.

Tell Japan’s big banks to publicly commit to not fund the Vung Ang 2 coal-fired power station in Vietnam. Delivering thousands of signatures before the possible announcement on 1 November could be the last push needed to get Japan's banks across the line and stop funding coal across the globe.

Why? Because all coal power brings significant health and human rights concerns

Vung Ang 2, a US$ 2.2 billion coal plant being developed by One Energy Ltd., a joint venture between Diamond Generating Asia - a Mitsubishi Corporation subsidiary - and China Light and Power, is reportedly being considered for funding by Japan’s Mitsubishi UFJ Financial Group (MUFG), Mizuho Financial Group, Sumitomo Mitsui Financial Group and Sumitomo Mitsui Trust Bank (SMTB), alongside the Japan Bank for International Cooperation (JBIC). The plant is proposed to be constructed on a site proximate to the Formosa Steel plant and the Vung Ang 1 coal plant, both of which have raised community protest. The Formosa Steel Mill spill is considered the most serious environmental disaster in Vietnam’s history.  In 2016, this steel plant spilled toxic chemicals into the ocean, devastating a hundred miles of coastline and rendering these areas presently unfishable, depriving communities of food and livelihoods. Vung Ang 1 coal power plant has been controversial given the proximity of coal heap to residential areas and farmland, and the air pollution resulting from the plant. This project was funded by JBIC, MUFG and SMBC in 2011.The commune residents and health care centres state that they see an increase in “heart disease, stroke, lung disease, skin problems and cancers,” from the projects already on the site.

Further, the only publicly available Environmental and Social Impact Assessment from 2010 does not demonstrate that the project-affected community was appropriately consulted on the issues, and it is unclear whether the communities are presently being informed or have been engaged with on these projects. Given the considerable cumulative impacts of the projects, robust consultation with this already burdened community is essential.

Vung Ang 2 is being developed in an economy where renewables are fast becoming cheaper than coal. According to a recent report from financial think tank Carbon Tracker, in 2020 it will already be cheaper in Vietnam to invest in new solar PV than new coal, with new onshore wind generated power expected to become cheaper than coal power in 2021.

Additional coal power capacity currently in Vietnam’s pipeline – an estimated 35.7GW – has been significantly delayed. These costly delays have coincided with decreasing cost of renewables, to the point where any new coal capacity commissioned after 2020, including Vung Ang 2, would be more expensive than renewables. As such, Vung Ang 2 would be at risk of becoming a stranded asset.

Both MUFG and SMTB have adopted credit policies with explicit commitments to phase out coal power financing in principle, and hence this project should not be considered for finance. However, both banks’ policies include wide loopholes. MUFG states in its policy revision of 15 May that “MUFG will take a cautious approach to projects regarding which financial assessment has been ongoing since before the revision to the Framework” and it will “take into consideration the energy policies and circumstances of the host countries, international standards such as the OECD Arrangement on Officially Supported Export Credits, and the use of other available technologies when deciding whether to provide financing”. Given the stranded asset risks of coal power alone as described above, MUFG should take its own advice and re-evaluate their financial support. SMTB also states that they may make exceptions to their coal power policy on a case-by-case basis, considering relevant international standards. The most relevant international standard, meeting the goals of the Paris Agreement - requires banks to stop funding coal immediately. A decision by both banks to continue funding new coal, despite their earlier commitments, will reveal the true nature of their ESG policies - weak. Furthermore, all 4 Japanese banks, including Mizuho and SMBC recently signed on to the UN Principles for Responsible Banking (PRB) on 22 September, which commit signatory banks to “align their business strategy with the SDGs and the Paris Climate Agreement”. A decision to fund a new coal plant barely more than one month after this commitment will undermine their credibility on the international stage.

Thank you for adding your voice! 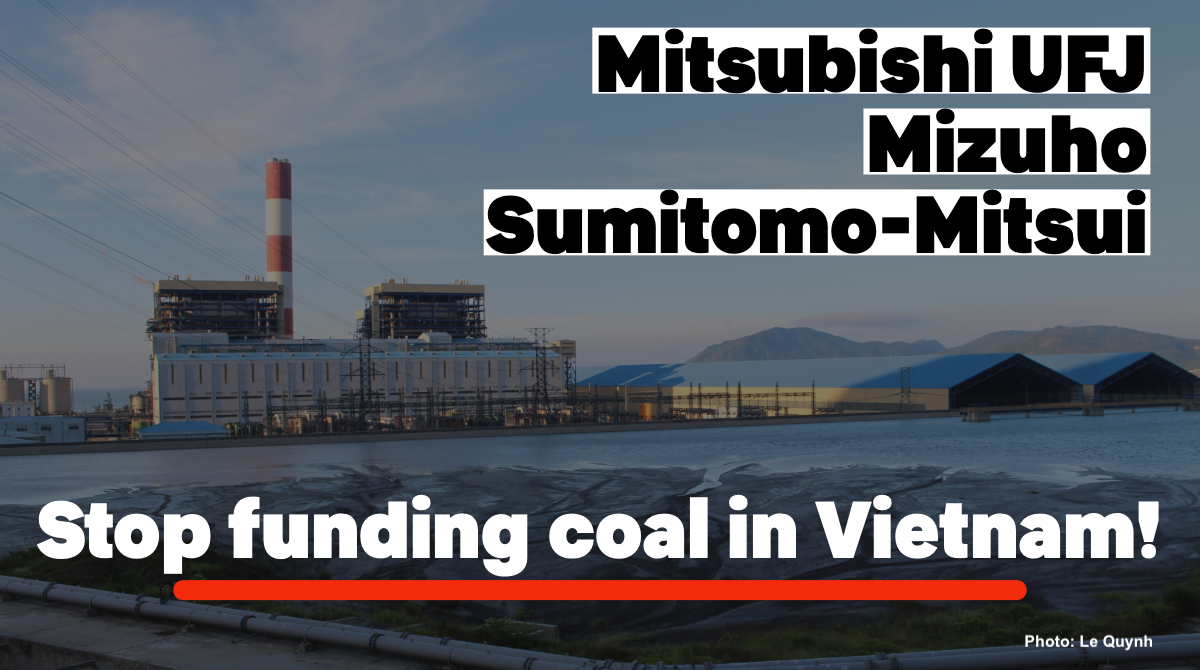 The science is abundantly clear that we need to keep fossil fuels in the ground to ensure a future for our planet, and that means we can’t let any new coal plants be built anywhere in the world. So the Vung Ang 2 coal-fired power station in Central Vietnam - currently planned for financing by Japan’s biggest banks - is a definite no-go.