In the face of Donald Trump’s climate wrecking pro-fossil fuel agenda, Senate Democrats’ job should be clear: resist the Trump administration’s climate denial, and stand up for clean energy economy that works for all of us.

That’s why it is unacceptable for a conservative pro-fossil fuel extremist like West Virginia Sen. Joe Manchin to hold a leadership position in the Senate Democratic Caucus.

Manchin once shot a piece of climate legislation with a hunting rifle to prove his allegiance to the fossil fuel industry. Now this month he teamed up with Trump to put the Exxon Mobile CEO in charge of our foreign policy, and a climate denier in charge of the EPA.

Manchin was also the only “Democrat” who voted to confirm extreme racist Jeff Sessions as attorney general and foreclosure king Steve Mnuchin as treasury secretary. In 2015, Manchin voted to defund Planned Parenthood. This is not how a leader of Democrats should act.

There is no justification for Senate Democratic Leader Chuck Schumer to anoint Manchin as a member of Democratic leadership. He consistently abandons progressives to vote for Trump’s extreme right-wing priorities and routinely collaborates with Trump by enabling his racist, hate-filled  agenda.

Manchin should not be helping to lead the Democratic caucus. Can you add your voice to pressure Leader Schumer to act?

It's very important that we spread the word now so that we can make a big impression on Senator Schumer. Can you share this with your social networks? 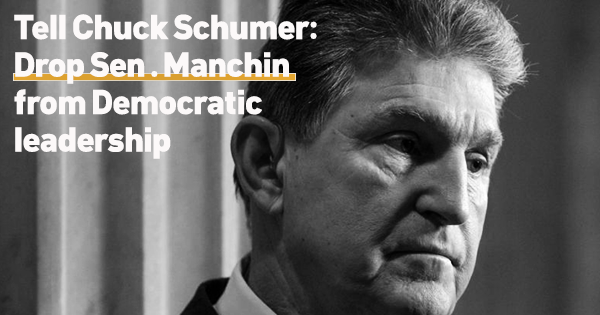 In the face of Donald Trump's fascism, Senate Democrats' job should be clear: stand up for core progressive values and defend the people most threatened by Trump. That's why it is unacceptable for a conservative extremist like West Virginia Sen. Joe Manchin to hold a leadership position in the Senate Democratic Caucus.