British Museum, please allow the peaceful protesters and their anti-BP Trojan Horse to stay in your courtyard overnight, until Saturday 8 February.

This morning, activists from the group BP or not BP brought you a huge wooden Trojan Horse brandished with the BP logo, to protest the oil company’s sponsorship of your Troy exhibition. They plan to stay with the horse overnight inside your courtyard, ready to welcome over 1000 people taking part in a mass performance protest tomorrow.

Show that you’re willing to engage with and listen to the people. Let them stay.

“British Museum, please allow the peaceful protesters and their anti-BP Trojan Horse to stay in your courtyard overnight, until Saturday 8 February.”

The climate crisis is the defining crisis of our time, and yet companies like BP are continuing to drill for and burn polluting fossil fuels. British Museum, you have let BP in, despite knowing full well the damage that its business model and practices are doing to this planet.

Now, we ask that you allow this legitimate protest by letting the protesters and their Trojan horse in too. This would show your willingness to listen and engage with the people, and not just polluters like BP.

BP likes to claim it is doing its best to combat the climate crisis, but in reality 3% of its investments are in clean energy and it’s planning to spend $71 billion in the next 10 years drilling for even more oil and gas. By promoting and defending BP, you're helping the oil giant to get away with it.

If you continue this partnership with BP, the protests against it are only going to get bigger and more ambitious. And they are not going to stop. Instead, we urge you to follow the positive leadership demonstrated by the Royal Shakespeare Company and National Galleries Scotland, and end this polluting partnership as soon as possible.

Like a Trojan horse, BP sponsorship might appear to be a generous gift, but inside it is hiding the death and destruction that will come from climate breakdown.

Success! The British Museum agreed to let the horse stay overnight and this petition is now closed.

Want to keep taking action?
Click or tap to get involved with our campaign to end fossil finance everywhere.

Thank you for signing the petition calling on the British Museum to let the anti-BP protesters stay!

Sign the petition calling on the British Museum to allow the peaceful protesters and their anti-BP Trojan Horse to stay in the museum’s courtyard overnight, until Saturday the 8th of February >> https://act.350.org/sign/british-museum-trojan-horse/
Share on Facebook 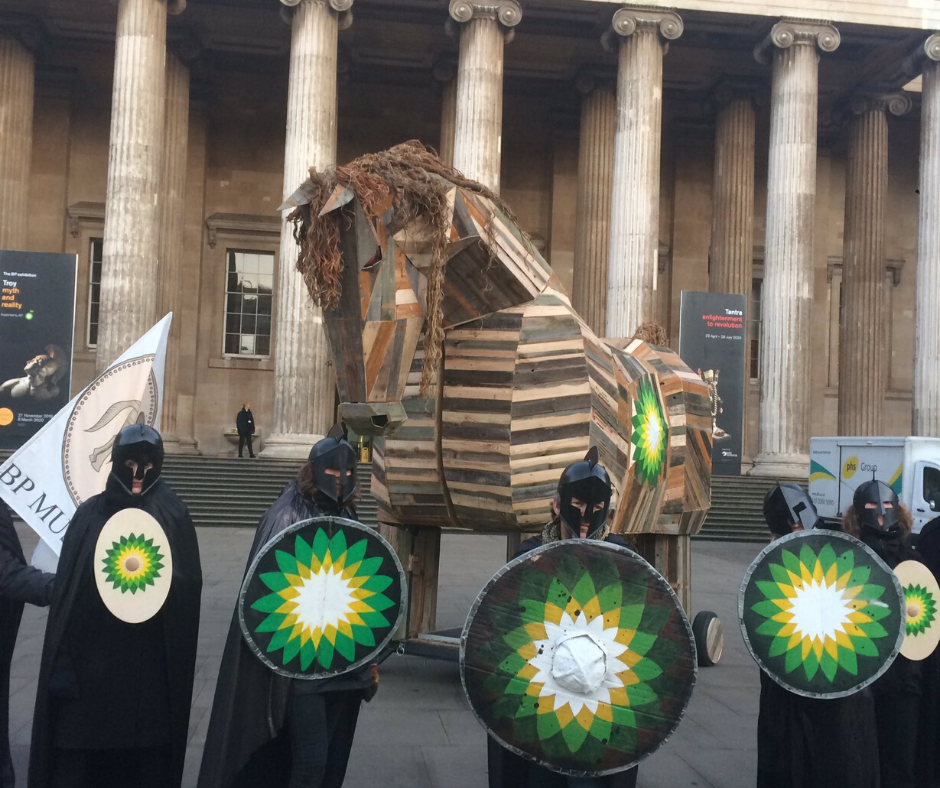 British Museum, please allow the peaceful protesters and their anti-BP Trojan Horse to stay in your courtyard overnight, until Saturday 8 February.